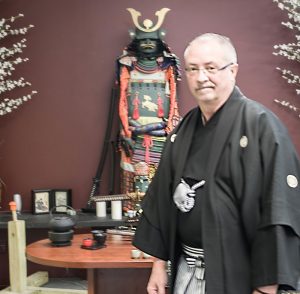 Shihan Jones is a Doctoral candidate in psychology and is the founding father (Kaicho) of Mushin no Shin Aikijujutsu Do and owner of the illustrious Fishhawk Martial Arts Academy. The academy is a traditionally based environment that best suits the precepts of the warrior spirit. Shihan Jones has studied and performed a variety of martial arts for over 42 years, studying Goju Karate, military close quarters combatives, Daito Ryu Aikijujutsu, and Shintoyoshin-kai (American combat jujitsu). In addition, he is a certified self-defense weapons (Kubaton) Instructor for the Florida Sheriff’s and Municipal Police organizations. He possesses a Master’s Degree in Psychology and is a certified Reiki Master, as well as being an active member of IDEA Health & Fitness Association. As a career U.S. Army Special Forces Officer with multiple combat tours, he is a recipient of the Combat Infantry Badge and Bronze Star for combat operations in Afghanistan, as well as being awarded the Legion of Merit for 31 years of service. He has instructed martial arts/combat defense to Law Enforcement Agencies, Civilian schools, US and Foreign Military units. He is currently the Aikijujutsu and Self-Defense Instructor at the Summerlin Military Academy located in Bartow, Florida. Shihan Jones is a recognized lecturer in Life Skills, Mindfulness, and Communications training. He also specializes in instructing Women's and Seniors self-defense in addition to training in the mental state of combat and defense. Shihan Jones is a Military Liaison Officer (MLO) for American Budokai International and is a member of the American Budokai Society.