Mushin no Shin Aikijujutsu Do

Focusing on the philosophical, spiritual and physical aspects that best represent the Bushi (warrior, knight), Shihan Jones has dedicated the last 40+ years of his training to learning and integrating the characteristics of the 4 styles and one defense system that best assimilated with the principles of “Aiki” and “Mushin no Shin”. The attribute that sets this martial art apart from the rest of the modern day systems, is that Mushin no Shin has an equal emphasis on both the spiritual concerns of the martial arts practitioner while synchronizing the combat art of joint locking, choking, and throwing techniques with the effortless movements of unbalancing the opponent. While there are numerous techniques within Mushin no Shin AikiJujustu Do, the essence of the physical art is to allow the mind and body to move effortlessly so one may perfectly adapt to any situation.

Mushin no Shin AikiJujutsu Do is a complete system of training for the mind, body, and spirit. Much of the training involves learning how to move efficiently and effectively, and that this physical training can change one's way of thinking. The techniques themselves are pathways to learning and eventual personal enlightenment. Ultimately, one who learns and discovers the essence of Mushin is not bound by set techniques or forms but can move freely, maintaining complete control over oneself and the situation at hand. This freedom is something that will encompass your entire way of life. In much more than a physical sense, this system will enable you to link mind, body, and spirit.

Mushin no Shin AkikJujutsu Do enables a student to:

(c) explore their own spirituality and connection with universal truths

Today, Mushin no Shin AikiJujutsu Do is a culture based on the Japanese warrior class which is steeped in a long history and tradition. It was developed as a means of self-defense against unprovoked violence, with the ultimate aim of neutralizing violence, not causing it. This is why Mushin no Shin relies on using forms (Kata) to train in the art but does not include competitive matches due to its inherent Martial and not sport nature. Further, as a traditionally based martial art, Mushin no Shin Aiki Jujutsu Do goes beyond the mere self-defense, offering the way to temper one’s body, mind and spirit with the aim of developing a strong personal character that will contribute to the greater good of society.

We foster positive behavior and focused training using a reward token system as well as belt promotions or kyu. 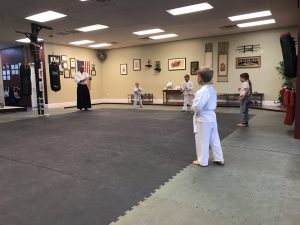 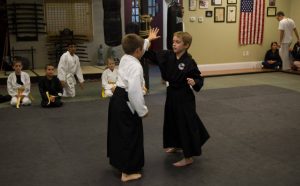 The Juniors program usually starts around 7 years of age and runs to age 12. Exceptions will be made depending on the size of the student and their level of skill.

The adult class is open to all individuals from the age of 13 and older. Some exceptions for younger students will be made depending on size and skill level. Adults train every Tuesday and Thursday from 7:15 pm to 8:15 pm and Saturdays from 10 am to 12 pm.

All Juniors and Adults that have achieved the rank of green belt or higher will have the opportunity to participate in randori (freestyle practice with protective gear) Sessions are on Instructers schedule.