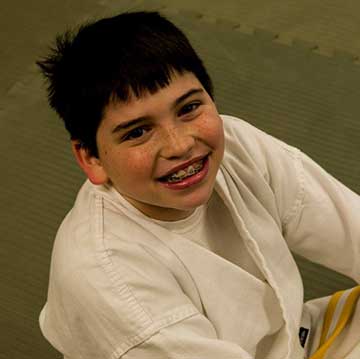 The FishHawk Martial Arts Academy has been one of the greatest gifts that we have received since moving down from New York to Florida. My boys had attended a Tae Kwon Do studio up North and it seemed the staff and owners were more concerned about giving out belts to appease parents rather than teaching the necessary skills. I referred to studios like that as belt factories.

FHMAA is sets itself apart from the other dojos in the area by stressing the importance of the art and tradition of Aiki jujutsu; which includes not only learning moves necessary to defend oneself, but also respect and honor. Their focus on academic achievement is also very important to me as a parent.

As a former school teacher, I am quite familiar with teaching students of all ages. as well as classroom management.  I was very surprised when I learned that Sensei Rock had no formal teaching training as he conducts himself as if he were a seasoned educator. He truly is a natural.  He knows how to relate to the children in such a way that makes learning not only exciting but fun. I couldn’t speak any more highly of Sensei Rock and the rest of the FHMAA staff.

I have watched my sons grow from showing very little interest in anything that wasn’t digital to expanding into future Samurais. We have even set up a home gym for them to practice, which they take advantage of as much as possible.

It’s amazing how the dojo is more than just a martial arts studio – it truly feels like a family. Thanks again FHMAA for all you’re doing for my children.